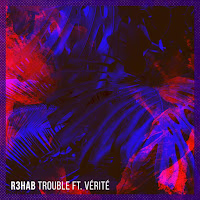 As it so happens, I'm really not a fan of VÉRITÉ's own solo efforts. The first and last time (prior to now obviously) I posted VÉRITÉ on WIIHAMB was way back in the summer of 2014 after the release of her first song 'Strange Enough', which went on to open her debut EP Echo released later that year. Since then I've seen VÉRITÉ live at The Great Escape 2015 and amongst other things including a new EP last year titled Living, she released a cover of The 1975's 'Somebody Else'. It went kinda #viral over on that there Spotify, and rightly so because it's landed itself firmly in my Undeniably The Greatest Covers Ever playlist. More recently, a mere few weeks ago, in fact, the New Yorker (I have no idea why I thought she was Canadian) put out a new single called 'Phase Me Out'. As I alluded to, I am not a fan but no worries as her even newer collaboration with R3hab was right around the corner.

R3hab's new single, 'Trouble', featuring Miss Kelsey Byrne is an addictive pop/dance crossover track apt for any occasion. The Dutch DJ/producer, real name Fadil El Ghoul, has been hot on the pop remix trail throughout 2016 with fresh takes on tracks from Zara Larsson, Calvin Harris, and Rihanna, so it's really nice to hear something similar that his name is at the forefront of. The other thing that is very nice about 'Trouble' is that it's not overpowering or overwhelming in the slightest. The verses and the choruses are, generally speaking, pretty chill, and the drop isn't too in your face either, with a really nice use of VÉRITÉ's sampled vocal. The likes of DJ Snake and Martin Garrix better watch out because it sounds as though R3hab is going to give European producers a run for their money this year.