Oh would you look at that, a change of format already.

A final update to January 2017's library. I know you've all been hooked on it.


Singles were really strong this week and I've given a fair few of them their own posts but my favourite popstar of the moment Zara Larsson is still waiting for her first proper WIIHAMB post. Her new single 'So Good' featuring the greatest "feat." artist ever, Ty Dolla $ign, self-professes itself as good but not much more than that. 'Quit You', Lost Kings' new collab with Tinashe, also made the cut but I was hoping for so much more. In addition to those songs we have Chinah's new grower of a single 'Even Love', a cool upbeat jam from Frances titled 'No Matter', and another benefit of the doubt for Syd with 'Body'.


Aquilo - Silhouettes I'm not sure why I quite so naively convinced myself this wasn't going to be packed full of ballads. It is. And I like Aquilo, they seem like nice guys, you know? But I find this kind of thing so fucking dull. It's boring. I am bored. It's not that this album doesn't sound nice though, it does, but it's a drrrag. That's not fair, it's not the whole album, but it's far more of it than I would desire. 'Good Girl' AKA "The Forgotten Single" was my favourite Aquilo work, and 'Complication' (co-written with Amber Simone who I have posted previously!) is a nice nod to that. I really like 'Always Done What You Say' as well just because it sounds so different to everything else on Silhouettes. 5/14 tracks added to library.


Deaf Havana - All These Countless Nights Regardless of how much I, personally, don't like Deaf Havana, this album is probably one of their best collections of music so far in their career. I'm not really sure where they stand within rock music anymore and I think a lot of people have become bored of them and written them off by now. That's a bit of a shame because I think the majority of people would be surprised with the calibre of the songs on All These Countless Nights. 'Like A Ghost' is probably one of the best songs Deaf Havana have ever released and I'll be very disappointed if it doesn't surface as a single. 2/12 tracks added to library.

Erik Hassle - Innocence Lost This album has been a long time coming but prior to pressing play it's already a bit of a disappointment on paper. 'No Words', 'Missing You' and 'If Only Your Man Knew' have already been released as singles over the last two years. Alongside those, 'Pathetic', 'Talk About It' and 'Innocence Lost' all appeared on Hassle's 2014 EP Somebody's Party. So that's literally half the album we've already heard. Overall, this record is fine but I only think two of the previously unreleased tracks, 'TKO' and 'Silver & Gold', are any good. 6/12 tracks added to library.

Greywind - Afterthoughts I really liked Greywind when they first surfaced a couple of years ago but I've become progressively far less fussed about what they do. It might just be the case that I've grown out of them, I'm not sure. As far as pop rock songs go, there's absolutely nothing offensive about Greywind but Afterthoughts feels very dated. No doubt I would have loved this ten years ago but it's just not exciting enough in 2017. No tracks added to library.

Kehlani - SweetSexySavage The deluxe is 19 tracks long and it all kicks off with a spoken word 'Intro'. Will I make it through this? It's unlikely. I actually think it's going to get to a point where all of the songs kind of roll into one. Even now, at seven tracks in, I can't really differentiate between the songs I've heard. Nobody needs an album this long, really, do they? And it's not good because never before heard album tracks just get so so lost. 'Too Much', for example, is excellent and I can't believe it hasn't been released as a single yet. 11/19 tracks added to library - essentially an entire album's worth of songs, you see where I'm coming from?

Migos - Culture There's absolutely no way I'm getting through all of this one, is there? I really appreciate that other people are extremely into Migos, and they seem like nice guys but their music means absolutely nothing to me. No tracks added to library. 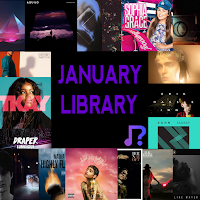