Last Week's Releases Today: Everything Is Not About U

New month, new library. Are you ready? Are you even reading this? I highly doubt it. If you weren't already aware, I still listen to albums but often they're too long so this is where I cut out the rubbish tracks and make albums great again.

Here's the playlist, give it a follow or just hit shuffle play and let's get started.


The most exciting one of these is by far Cold War Kids who are back with new single 'Love Is Mystical' from their forthcoming sixth(!) album L.A. Divine. There are some real surprises this week too, Mastadon's new single 'Show Yourself', Nickelback's new track 'Feed The Machine' and also a new song from brooding actor Ansel Elgort, 'Thief'. We've also been treated to a new William Singe cover in the form of 'Rush', and a surprising but welcome change in musical direction for Liv Dawson on 'Searching'.


Big Sean - I Decided. I was really surprised that I actually liked this overall. I have no idea what I expected but this was definitely not it, so that was cool. Big Sean's lacklustre features on other artists' tracks really don't do him any favours with those who haven't heard any full projects he's worked on, which is really silly because is that not the point of featuring on somebody else's track? Anyway, the album overall is a little taste of everything where hip hop is concerned but 'Jump Out The Window' and 'Owe Me' were my favourites. I thought the track featuring Eminem, 'No Favors', had potential too but I just didn't really like it that much. 4/14 tracks added to library.

Fenech-Soler - Zilla I actually can't believe how disappointing this album is. When Fenech Soler released their debut self-titled record seven years ago I fell head over heels in love for it. I was excited for their return towards the end of last year but Zilla feels like such a lacklustre effort. 'Kaleidoscope' is a good single but it's nowhere near amazing. I loved the sound of the first verse of 'Undercover' but the rest of the track just amounted to nothing and that is essentially this album in a nutshell. 1/10 tracks added to library.

Kevin Garrett - False Hope This is a good EP, the end. I can't pinpoint who Kevin Garrett sounds really similar to which is something I am finding terribly frustrating. It could be JMR but that seems like quite a niche reference and not quite the connection I want to make. It's probably actually quite tricky to nail the guitar based alternative R&B thing but Garrett does it very well. 'Little Bit Of You' is a song that is something wondrous. 3/5 tracks added to library.

The Knocks - TESTIFY Ah *deep sigh* The Knocks... this EP... why?! Well, I can make assumptions as to why, and those begin and end with the fact that their debut album took so long to come out, the duo already have a plethora of more recent material to unleash. The problem is that... it's not all that great. Obviously MNEK collaboration 'WORSHIP' is everything anyone could have hoped for and 'HEAT' meets similar expectations. It's just all four of the other tracks that let this EP down; they aren't the pop bangers we dreamed of or wanted. Let's hope this is just a filler between records, I still have a lot of time for The Knocks. 2/6 tracks added to library.

Lower Than Atlantis - Safe In Sound Here's my beef with LTA: You see this time last week, I was writing about Deaf Havana's most recent album and how it was a welcome surprise to hear them return to somewhere between some of their earlier material, but from a more mature stance? Well, Lower Than Atlantis seem intent on doing the opposite. With every record the four piece seem to become less original and less interesting overall which is a real shame. Go back and listen to Far Q instead of listening to Safe In Sound. 2/10 tracks added to library.

The Menzingers - After The Party I don't like The Menzingers so I didn't like this album, which is absolutely fine. However, it's totally an album I would pretend to like if a boy I liked liked it. One of those. No tracks added to library.

Muna - About U I don't like Muna, so as you can imagine this album was not particularly enjoyable to listen to. In contrast to my feelings towards The Menzingers, I don't really understand why people like MUNA, like, I super super don't get it at all. It's the vocals, they grate on me. I can not be apologetic about this. I can't imagine anybody thinks MUNA are a thing that I like or would like anyway, so this is all pretty by the by. No tracks added to library.

Sampha - Process I was concerned going in to Process as we're all aware that Sampha is no stranger to a ballad, however there is not an overwhelming amount of that on this album at all. Process is a record that keeps you on your toes, with a myriad of different sounds, themes and ideas. It's the kind of album that makes you want to hear the songs live, which I think is quite an achievement. 6/10 tracks added to library.

Syd - Fin Everything that I was worried about happening on the Kehlani album last week happens on Syd's album. I was so excited for a full length solo effort from Syd but nothing exciting happens on Fin at all. Every track just blends into the other in a sea of beige, to the point where picking out songs that I actually enjoyed became a genuine struggle. I'm really perplexed. Syd is so much better than this so why is this this? 6/12 tracks added to library... which is quite a high proportion given those thoughts, isn't it? 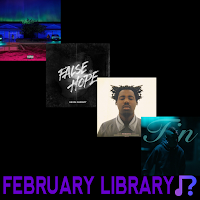