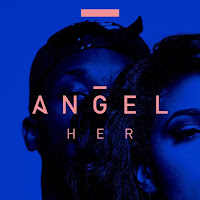 You remember Angel, right? One of the least searchable artist names of all time. For those who don't recall, Angel, London based singer type, released a load of stuff around 2012 and 2013 that did quite well UK chart and radio-wise. Also let us not forget his work on Fuse ODG's 'T.I.N.A.' Angel does seem to have been releasing tracks in the interim but I hadn't noticed until 'Fcxk With You' wound up on a New Music Friday playlist and what a joy that was to hear.

I really don't think I was prepared for such a great R&B song from an artist I'd nigh on forgotten about. 'Fvxk With You' isn't overly intelligent or groundbreaking, but it's a fun song about fucking with you and I don't really know what more you wanted to be honest. Rich Homie Quan is a surprisingly good choice of featured artist, with his verse fitting pretty snuggly in to the middle eight section. The video is full of some lolz too. The subtitles throughout the opening dialogue are very self-aware and the main video girl sporting the Man U shirt whilst this video is blatantly filmed in America is just straight up amusing.

It's a shame about the rest of his Her EP from which this track is taken. It's not a particularly stand out effort overall and there's one track, 'Tongue Song', that really unnecessarily samples Sisqo's 'Thong Song'. The original is too iconic for mediocre samples, there's just really no need for it. With artist like Shakka on the rise, Angel's new EP quite simply isn't up to scratch with what fresher artists are doing at the moment.