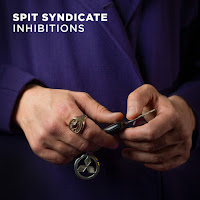 Sometimes Australia's New Music Friday playlist throws up some real gems, songs that aren't so blatantly flying around elsewhere on the internet. Not too often, but sometimes. An example of this from way back in November is Spit Syndicate who continue to fuel my love for Australian hip hop.

You will all be terribly excited to learn that I have once again turned to Wikipedia and Facebook to do my research for today's post. Spit Syndicate are a duo from Sydney whose members Nick Lupi and Jimmy Nice join Horrorshow (who I posted a little while ago), Jackie Onassis (who I was really into a few years ago), and Joyride to form One Day crew. I don't quite know why I find the concept of "rap/hip hop crews" existing outside of the UK so peculiar, but I did, and there's absolutely zero justification for that thought process. There's something I find really cringeworthy about a lot of UK based white rappers, but I really don't find that's the same with Australians. I think in the UK white rappers are maybe trying to live up to precedents set by others in their field whereas from what I can tell about the "scene" in Australia, there doesn't seem to be the pressure to follow the same pattern. Really I have no idea, just a conclusion I've plucked out of thin air.

Anyway so this Spit Syndicate single is called 'Inhibitions' and it's really fun. The kind of song that you wish your friends knew all the words to as well for maximum impact. I absolutely love how chill yet packed with vibe the chorus is compared to the verses being just the right amount more "aggressive" (OMG am I in my 40s?) with the bass behind them. I have never before quite desired to get so lifted in a Mitsubishi as I do right now. Quite a lot goes on in this song too, there's a nice little interlude at the end. I have no idea what's going on in the Spit Syndicate camp at the moment but I'd image that if there's an album in the works that interlude would make a hell of a lot of sense.