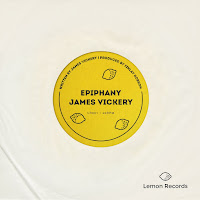 Toyed loads with whether I should post this or not and I decided I probably should because it is such a vibe. And there goes another excuse as to why I post stuff so late.


Somehow due to a minor blip in my paying of attention I didn't take note of James Vickery's feature on the Joe Hertz EP back in September. Bit embarrassing really seeing as I like to think I'm a strong advocate for good feat artists. Vickery appears on the opening track, 'Swimming', and it's definitely one of my favourites on How It Feels. And you know what's nice? When you have a bit of previous with someone before they release their first proper single. That's what's nice.

'Epiphany' is what appears to be James Vickery's "first proper single" and as mentioned, it is such a vibe. I think the reason I was conflicted about posting is because there are so many male artistes doing this similar sounding R&B slightly electronicy thing at the moment (just take a glance at SG Lewis, Louis Mattrs, Sam Sure etc). But when a good song is good why should the fact that the genre is popular deter the song from receiving the praise it deserves? Vocally, Vickery is great and I think that he'd probably sound even better live, in a setting where his voice isn't so shrouded by backing vocals at points. Looking forward to hearing other tracks he has in store.

EDIT: Really, should I have waited until Epiphany to post this?