While She Sleeps - Hurricane 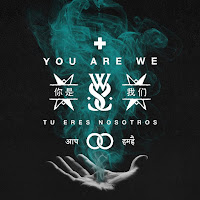 The new While She Sleeps album is going to be so wild, isn't it?

'Hurricane' seems to be the first proper single to be taken from You Are We and oh my God it's absolutely fucking incredible. Spending time around pop fans earlier this week, the stigma that metal has around those who aren't so familiar with it is immediately apparent. But I think band's like While She Sleeps are here to break that barrier down. There's absolutely no question about the "heaviness" of their music at all, and their ability to blend that with genuine pop choruses is phenomenal. A lot of people try to tell me about how many pop elements there are in their rock band's music but honestly, those elements so rarely actually exist. And that's what makes While She Sleeps so incredible. 'Hurricane's hook is second to none and it sets them apart from other popular rock and metal bands.

There's absolutely no doubt that You Are We is going to be While She Sleep's career highlight thus far as well as one of the greatest albums to look forward to in 2017. They're touring it in April next year too. I'd highly recommend getting to a show. I also reckon they'll probably headline that there metal stage at Slam Dunk next year too.