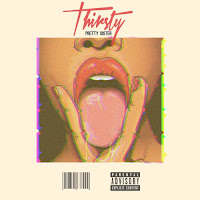 Oh my God, I am so straight for Pretty Sister. That is, categorically, the strangest sentence that you will read today. You're very welcome.

What I like most about Zak Waters' current project Pretty Sister is that his lyrics are so refreshingly and blatantly shameless. We heard this on 'Come To LA' earlier this year, featuring the line "come to LA and fuck me" and this all openly returns again on new single 'Thirsty'. Is this a good direction for pop music types? Should we force them to all be just as honest as Waters? This realness is a cool thing though, as well as being a little amusing it does actually resonate with normal people, doesn't it? No lame metaphors that allude to something but really mean quite the opposite.

Lyrical content aside, 'Thirsty' is a modern day masterclass of electronic pop meets funk. I saw a very complementary tweet about Pretty Sister the other day basically about this track being funkier than the new Bruno Mars album. Thinking about it, Pretty Sister would be quite a nice opener on that multi-million dollar generating worldwide tour that ol' Bruno is doing next year. Anyway, as I was saying, 'Thirsty' is actually quite different in terms of feel and tempo compared to the other tracks that Pretty Sister has put out thus far which is actually quite welcome. Waters' vocals are, as expected, an absolute treat as well. We must be due an EP or something soon, right?