Aquilo - You Won't Know Where You Stand 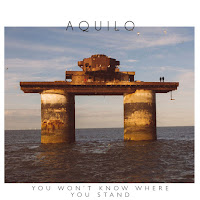 Aquilo first put out 'You Won't Know Where You Stand' back in October and I was very nonchalant about the whole affair. To be honest, since tipping them as one of my Artists I'd Like To See Do Well in 2016 I haven't been a massive fan of the duo's works. But who cares if I'm a fan or not because these songs are categorically really good and everyone else is into it. Listening over 'You Won't Know Where You Stand' again now, I'm not too sure what my problem was. It's nowhere near as ballady as more recent track 'Sorry' or Christmas song 'So Close To Magic', but I guess we all make mistakes, don't we.

Since September 2015, when Aquilo put out for the greatest lost single of our generation 'Good Girl' (well, to be fair, everybody should have probably realised this with the release of the 'Calling Me' video, but as a song 'Good Girl' really shook me), their eye for a good music video has been widely appreciated and the follow up has been highly anticipated (by me, at least). This brings us to Aquilo's Silhouettes Trilogy. Silhouettes is the title of the pair's forthcoming debut album, set for release in a couple of weeks, and as a preface to this we've received the first part of the trilogy, and music video for 'You Won't Know Where You Stand'. Directed by Eoin Glaister, the video tells the story of an ice skater and what appears to be her blossoming love life. At first I thought maybe the other two parts of this series might flesh the story in this video out a bit more... but now I'm not sure why that would happen or exactly what would go on with that. I'm pretty intrigued about the full series either way.