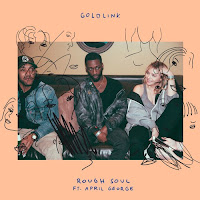 No idea what's going on here. Goldlink originally put this track out a couple of months ago but apparently it's only just made it on to digital stores. Fine by me seeing as even though I drafted 'Rough Soul' to post last year, I didn't. 2016 was a terrible time overall for my relationship with WIIHAMB but look how on track I am now! Sure, that's mostly down to the fact I am sans full time job but you win some you lose some, you know?


I really rate Goldlink as an artist overall. Even though a lot of his tracks sound quite different, they're always unmistakably him. A lot of people I shared tracks from his album And After That We Didn't Talk with seemed to find some of his lyrics and lyrical themes a bit much, which is frustrating because I think Goldlink's general style is so much more sophisticated than that of many of his peers. And that's exactly how he can pull off tracks like 'Rough Soul'. Produced by Kintaro of The Internet (!!), this is even a cut above some of the band's own more recent material. This track is just so undeniably smooth, especially with the addition of April George's vocals on the chorus.