There were a great deal of releases out this week but they were all quite underwhelming if I'm honest, which I am. My thoughts on most releases are below. I tried to listen to the AFI album but I was so bored I didn't make it past track four so thought it not fair to include.


Obviously you're more than welcome to follow that playlist right there right here.


Bernhoft - The Morning Comes Overall this EP is quite different to other stuff I've heard from Bernhoft, or at least, the other stuff I thought I'd heard from Bernhoft. The standout is still 'Visceral' which I posted here but it's impossible not to like the other tracks too. In fact, I was actually going to remove this EP from the library but listening to them again, in the least cliche way possible, these songs just effortlessly sink into you. I can't imagine anybody not enjoying The Morning Comes.

Lyves - Like Water A very long time ago (about nine months ago), I posted 'Darkest Hour' and Francesca Bergami sent me a really nice email that inevitably got lost in my inbox, but I'm really glad this track has come back around again on her debut EP and with a new video! Like Water is an absolutely lovely 15 minute long body of work that truly deserves everybody's time. I would also recommend as a great EP to cry to, because we all need one of those.

Shy Girls - Salt I'm really lost on Shy Girls because some of his material has shown an immense amount of potential but then I found this full-length, Salt, to be highly underwhelming. Nothing on this record is below average by any means but with so many artists making similar music you really have to go that extra mile to stand out. There are still some good tracks on here though, notably 'Say You Will' and 'You Like The Pain Too'.

Sophia Grace - Hollywood EP An artist who you guys are all going to have to start taking seriously one day because she deserves it. There's no immediate rush as Miss Brownlee is still only 13 years old, but a post-GCSEs Sophia Grace is likely going to be a force to be reckoned with. In fact, I recently referred to her as a pre-Daya Daya and just look at the year she's had! The best thing about the Hollywood EP is that all of the songs on it are unashamedly written for a girl in her early teens; they're fun and playful and tracks you'd want your tweenage daughter to be singing along and listening to.

Tkay Maidza - Tkay I'm six tracks in and I'm really not enjoying this album at all. The more club leaning songs with heavy production come across as really overwhelming. As soon as you hit the halfway point on Tkay, the album becomes so much more easily digestible. I think 14 tracks is just a bit too long for this debut effort and it results in great tracks like 'You Want' and 'At Least I Know' getting lost at the end, which is a darn shame.


The most exciting thing about these single additions is that I have finally found a John Mayer song I can stomach in 'Moving On and Getting Over'. There's also a new banger from Alex Mills titled 'Be Somebody', new/old slow jam 'Don't Need U' from Astronomyy, and a nice pop ditty entitled 'Something About You' from Tayler Buono. I've come around to the new Maggie Rogers track 'On + Off' and I've giving Tinie Tempah and Tinashe's collaboration on 'Text From Your Ex' the benefit of the doubt. Finally, I've stuck in the title track from the new While She Sleeps album 'You Are We' and Slaves' (US) new single 'I'd Rather See Your Star Explode'.


As It Is - Okay I doubt this album will even be that. 'Pretty Little Distance' is an All Time Low cover, right? It's just so uninspiring from start to finish; I'm going to finish it, but I'm going to be very bored doing so. Why don't they let the other matey (who isn't Patty Walters) sing more? The songs are so disinteresting and I am so bored. When will it end? 'The Coast Is Where Home Is' is actually embarassing. This is the longest 36 minutes of my year so far.

Frank Carter and the Rattlesnakes - Modern Ruin This album is probably a compilation of Frank Carter's best pop-leaning material, but personally I just didn't really enjoy it. I can tell tracks like 'Lullaby' are really good and obviously they've had great mainstream radio success which is totally cool. It's just not something I'm into. It's something I think fans of pop rock tinged indie-punk would be fans of.

Loyle Carner - Yesterday's Gone I find Loyle Carner's voice really grating but I totally appreciate that he and his music don't sound much like anything or anyone else in the UK at the moment and that he does bring something different to the table. It's just not for me in the slightest. I do really like 'NO CD' though.

Jacob Sartorius - The Last Text EP There's actually a 'Frère Jacques' sample on the chorus of one of these songs which is baffling. I'll be honest, 'All My Friends' isn't that bad but it would be far better if it didn't just sound like a straight up Justin Bieber rip off.

WSTR - Red, Green or Inbetween Pop punk album is pop punk. Quite possibly more than any other UK band, I am indescribably infuriated that frontman matey from WSTR, based in Liverpool, has an American accent. If you played me a song from WSTR and a song from also not American band Neck Deep, I wouldn't know which was which. Imagine releasing an album this uninventive. 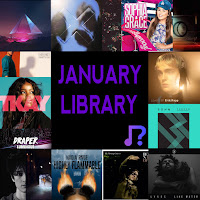