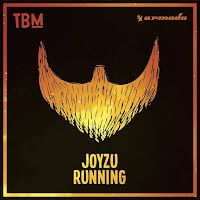 I heard this song, I thought it was cool, and here we are. Joyzu are a duo from the US of A made up of Carson Wilms and Quinton Pope. I just read that they're both still in school, I don't know what kind of school, like you know in America they refer to "college" as still being school when we're sitting over here being like "no... I think you'll find that's university." Either way, to still be so young and pumping out music of the calibre of 'Running' is pretty cool.

I assume that one of Wilms or Pope does the vocals on 'Running' as there's no credited vocalist and Olivia Reid is featured on their two previous singles. The vocals work really well over this electronic style though, and have a really current vibe. To be honest, Joyzu could go up against some of the planet's hotly tipped electronic duos and give them a run for their money (no pun intended). 'Running' sounds as though it's in a completely different league to those previous singles I mentioned, rad vocal lines, an epic build, a good yet not intrusive drop, if they continue on this path they'll shoot to stardom in no time.