TL;DR: This is a brilliant song of which there are now three versions which are not remixes. 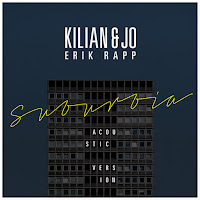 I never posted the original 'Suburbia' because as we're all now well aware, 2016 was a tough ride for WIIHAMB but Tom Aspaul and I did discuss how much we loved it during Episode 1 of The Middle Eight Podcast. Kilian & Jo are a German production duo, and Erik Rapp is a Swedish artiste who just released his own debut EP, Lovers, and prior to that appeared on Idol Sverige (Swedish Idol, duh) back in 2013. In August, together, they released pop-dance crossover song of the year 'Suburbia'. Not only are Rapp's vocals quite simply excuisite, the production on this track is mad tight. The "still I'm crushing on you" line is heart-wrenchingly relatable and the brass drop is so unique compared to what other producer types are doing. Yeah, I'm looking at you The Chainsmokers; you suck.

Even though it's been five months since 'Suburbia's original release, it's been given a little 2017 boost with two new versions. The most notable of these two is the 'Acoustic Version'. You'll recall that I loathe ballads, but this is in a whole other league. Featuring just Rapp, a piano and a non-descript string instrument, 'Suburbia' is completely transformed and it sounds absolutely incredible. The frustrating thing, however, is that this version is not available on the likes of Soundcloud or YouTube.  What is, instead, available is the 'Castle Version', similar in terms of Rapp and piano, but slightly different sans strings and added drum machine. It's good this one too though. I think that's really a testament to how incredible the crux of 'Suburbia's songwriting is. You can make all of these adjustments however great or slight and the song still shines through.

This really deserved and still deserves to be the biggest hit of our time.