Can you believe it's that time already? Time for 2017's annual Tips Venn Diagram! Lo and behold: 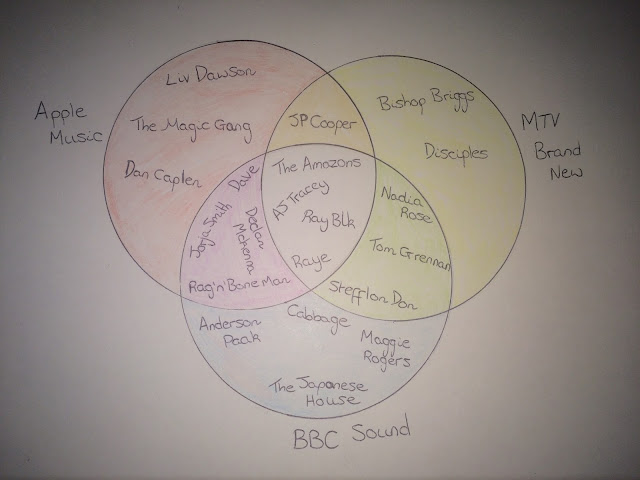 Before we go any further there are some things to note. There was no Blog Sound Poll this year, yes, that is the sound of my heart shattering. Secondly, let's discuss Vevo Dscvr's omission from this year's diagram. The first reason for this is quite simply because including it would have been a logistical nightmare in design terms, even more so considering Vevo's list is a whopping 20 artists long. However, the main reason is because with, as you can see, so many crossover artists covered by the three lists above, it wasn't fair to lump a genuinely well crafted list in with the all of those obvious choices.

So here are Vevo Dscvr's Ones To Watch:

Although I can't offer alternatives of similar popularity, I do find the vast majority of picks this year a bit odd. There don't seem to be any obvious winners of the BBC Sound Poll, although if I had to predict a top five it would probably be Rag 'N' Bone Man, Raye, Jorja Smith, Declan Mckenna and The Japanese House, but it still feels a bit like it could go anyone's way. [EDIT: Obviously I wrote this sentence prior to the start of Radio 1 counting down the top five.] However, there are two artists who appear on all four lists in question: Raye and Ray Blk. I was a fan of Raye's debut EP/mixtape, Welcome To The Winter, but I haven't really liked anything she's done since then. To be honest, I didn't think Second was a good body of work at all and I'm still quite lost as to why other humans liked it, but Raye definitely does have good song-writing ability in her. I consciously slept on Ray Blk throughout 2016 including not bothering to catch her supporting SG Lewis and letting her EP pass me by, and I am willing to admit that was an error on my part. Other artists who received three out of four nods from the lists above are AJ Tracey, The Amazons, Nadia Rose, and Jorja Smith.

On a personal note, I don't have much of a fondness for many of the highlighted tips. The most exciting name to see was Dan Caplen on Apple Music's New for 2017 list. Anderson Paak's place on the BBC Sound of longlist seems fair but with the release of his debut album almost a year ago, it feels as though maybe he should have been featured back in 2015. I'm also glad to see JP Cooper on two of the lists but with quite a bit of mainstream support over the last few months I was surprised not to see him on the BBC Sound of poll.

Although it comes as no surprise that the most disappointing aspect of these tip lists is the omission of rock. No, The Magic Gang and Will Joseph Cook do not count Whilst The Amazons feature in the centre of the Venn, Vevo have picked up another couple of bands with Creeper and Big Jesus but two out of twenty acts still isn't very representative, is it, for a world as big as rock and metal? This gives the impression that there aren't (m)any young rock acts worth noting or keeping an eye on which is super fucked up because there are, spanning a number of sub-genres, but it definitely won't seem like it to people in "the mainstream" if these outlets aren't pushing them. Also, in a contrast to the last couple of years, it feels like there's almost an over-representation of urban/rap artists which  I find... bewildering.

Despite this, Vevo Dscvr really succeeds in carrying out the mission of a tip list. Bringing upcoming and genuinely promising artists of all backgrounds to the attention of the casual music fan. Hell, there were three artists on their list I'd straight up never heard of before, and as a fan of many-a-genre I was shocked by that. There are four female rappers of colour on Vevo's list, including two who are openly LGBT; already we're winning. In fact, men barely get a look in on this list. Well, that's not strictly true but at a glance there are definitely far fewer of them, and that's interesting. Shake it up, Vevo.

Finally I just want to mention two artists finding themselves on The Venn Diagram (and the Vevo Dscvr list) for a second year running. The Big Moon and The Japanese House were both voted on to the Blog Sound Poll longlist last year and The Japanese House also found herself on 2016's Vevo Dscvr list. Yet more proof Vevo know what they're talking about when it comes to new music.

If you're even remotely interested in my artists I'd like to see do well posts then stay tuned because there is a new episode of The Middle Eight Podcast landing imminently and then I'll be discussing all of my picks in more detail on Thursday!
---
BLOGLOVIN / TWITTER / TUMBLR / INSTAGRAM