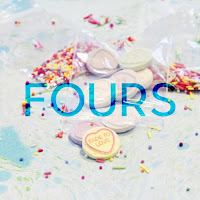 Things are terrible. I mean, things are always terrible, it's just that usually people don't seem to notice, but at the moment everyone's really aware of the whole "the world's an awful place" thing. There are ways to conquer that kind of thing though, and Fours are a band I would highly recommend for it. They have a new single, it's called 'Fade To Love' and if you're familiar with the quartet's previous efforts you will not be surprised to learn that this new song is the indie pop bop you've been waiting for. 'Fade To Love' isn't quite as sickly sweet (HA!) as their previous two singles but feels like a bridge between those tracks and their debut EP, which was released way back in 2015. This song is a very welcome slight change of pace to their catalogue, if you ask me.

Also, there's a video! It sees front-human Edith Violet taking on various personalties on Fours' own brand of Tinder, the Fade To Love app. I'm quite jealous, actually, that matey doing the swiping swipes right for every single personality. Sure, I bet both Foreign Secretary and Drug Dealer Edith have their benefits, but what's the use in a partner who is a Professional Penpal other than some nice note paper? And who even uses notepaper these days? I know I have some really nice note paper that I got as birthday presents when I was little. Have I ever used them? No. Do I have any desire or intention to use them in the future at any point? No. See, pointless.

Fours are playing their next London headline at the start of March, I suggest that you be there. It's only £5 which is a disgustingly cheap amount of money for the amount of fun that will no doubt ensue. Ticket link is here.