Guess who is back? Correct, it's me. I was originally going to just keep updating the one post throughout the month but I thought that might get quite messy so I've decided against it. Let's see how long this lasts.

Details of albums, singles, and EPs that were both added and omitted in week one are here.

You can easily follow the playlist embedded below here. No one has yet, so that would be nice if you did. Just put it on shuffle or something for a little bit, you might enjoy it. Of course, you might not but it's worth a shot, right?

Chris McClenney - Portrait In Two A Bastien Rayno recommendation. This release is billed as an EP even though it's ten tracks long, which is baffling. I really enjoyed a few of the tracks from Portrait In Two, especially 'What You Mean To Me'; that one is outstanding. But I think anyone more interested in soul/funk/jazz will get even more enjoyment out of this "EP" than I did, so I'd recommend if that's what you're into.

Draper - Luminous I know very little about Draper as an artist, but what is evident from this six-track EP is that he's very good at picking up rising artists for collaborations. The highlights on this release include songs with Sam Sure, BB Diamond and Kyko. These are just really satisfying feel good dance tracks, not much more to it.

Erik Rapp - Lovers EP As proper debut pop EP releases go, this one pretty much hits the nail on the head. If 'Closer To You' was available on an online platform such as Soundcloud or YouTube that would no doubt be getting a post of its own because it's a banger. Rapp's story-telling through the other three songs is really good as well. Always shook by stuff like this from artists whose first language isn't English.

Nadia Rose - Highly Flammable This album is a really great example of why I don't generally talk about things I don't like. There's clearly nothing wrong with this record at all but I just don't think I'd ever listen to Nadia Rose of my own accord. I do really like the mix of different sounds and extracts from different aspects of urban music throughout this album, it does have a really fresh and exciting feel. Listening to Highly Flammable it's clear why Nadia Rose featured on so many 2017 tip lists. The only tracks I personally enjoyed were single 'Skwod' and 'Murder'. 'Crank It (Woah!)' was a weird one to slap on the end of this though, wasn't it?

Sohn - Rennen Sohn's debut took me quite a while to really fall in love with so I'd like to give Rennen more than a week too, just to see how it develops and all that. It's obviously good, but it's definitely a record that I think one could get more out of over time. The only track I haven't included is 'Falling', just not a fan of that one.

The xx - I See You I really like how much The xx have switched up the music they're making. With the calmer elements strewn throughout and Romy Croft and Oliver Sim's unmistakable dual vocals, I See You is definitely still The xx but their sound has progressed a lot. This isn't at all surprising given it has been over four years since the release of Coexist. However, I didn't find the slower and more stripped back cuts on I See You as captivating as a lot of their similar older material, which was a shame.

Zanski - Collapse EP When I added 'Acid' to the library last week I mentioned that I'd straight up lifted it from Bastien's playlist and I'm so glad he's on top of Zanski's movements because missing out on this EP would have been an absolute travesty for me. I think this might actually be my favourite release this week on its first listen. Amazing R&B pop vocals over super clean production. There are so many artists doing this kind of thing at the moment, it's so good to hear someone stand out from the crowd.

We're a bit thin on the ground this week for good singles. And by a bit I mean: very. We have good remixes of two excellent songs from last year, Aasanya's 'Burn Break Crash' and Flume's 'Say It', by Lophiile and Illenium respectively. I've chucked in a couple of Swedish language pop songs in, Adrijana's 'Nån som mig' ('Someone Like Me') and Martin Masarov's 'Tänka Påre' ('Think About'). My goal for this year (amongst other things) is to listen to more non-English language music and Scandipop seems like a good place to start. Syd (of The Internet and OFWGKTA fame) released a solo single which didn't blow me away but I'm convincing myself I like because I love her. My mate Taylor's band Guillotine released a new track called 'Butterflies', which is a nice little emo vibe if that's what you're into. And I've thrown in a couple of tracks straight up stolen from Matthew's May The Pop Be With You playlist too.

Bonobo - Migration This was just severely not for me. I don't really get on with instrumental stuff in general and I totally get why this album is good, and why others would be into it. But atmosphere building is not something I am into. I did really like 'Kerala' though, something about that kind of vocal sampling strangely seems to resonate with me. I've written a lot more about 'Kerala' here.

Code Orange - Forever I thought everybody said this album was good? This was really tough to get through and I did not enjoy it. I don't feel remorseful about these opinions. 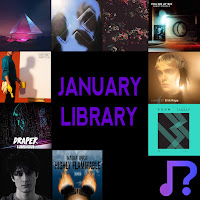