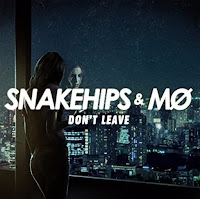 Despite a myriad of different writers on each single, these past three have done very well at capturing the whole millennial existential crises thing. First Tinashe and Chance whining about how they hate going out and getting drunk, then Zayn on one of the most under-rated songs of 2016 saving love for someone or something, and now MØ being a bit upset about being a fuck-up. Truth is, Karen, you're pretty successful and stuff now, don't pretend you're still like the rest of us.

Let's dive in because I heard you were after some facts when it comes to Snakehip's inevitable new banger, 'Don't Leave'. We're going to talk songwriters. Obviously we have Karen Ørsted herself alongside Snakehips' Oliver Lee (what does the other one do? who knows) but after that things get a lot more interesting. First up is my fellow Croydon local, Raye. Did I not say less than a week ago that she had great songwriting ability inside her somewhere? I think I did. Next up is Joe Janiak is who that guy from Tove Lo's 'Vibes', you know, the song with the best pre-chorus of the entirety of 2016. I've never heard of the other two writers, Davie and Negin Djafari, and they don't seem to have any previous notable works however Djafari is Swedish so that all bodes well. And of course, would a Snakehips single be a Snakehips single if Cass Lowe wasn't in on the production.

As mentioned, Snakehips do this relatable lyric thing quite well and it will probably play quite a big part in this song's inevitable success. Tapping into the self-loathing of young people and being all relatable really works in Snakehips' favour. Alongside that, the best thing about 'Don't Leave' is that there's a real chorus and not just "a drop" which is a welcome change to electronic pop music generally but something that this duo seem to do quite well. With the rise in popularity of "the lyric video" in this day and age, I wonder if we'll see a real music video for this track... I assume we'll have to, right? 'Don't Leave' is performing fairly well on the iTunes chart at the moment but a real video could see it make a surge to the top, I'd say.